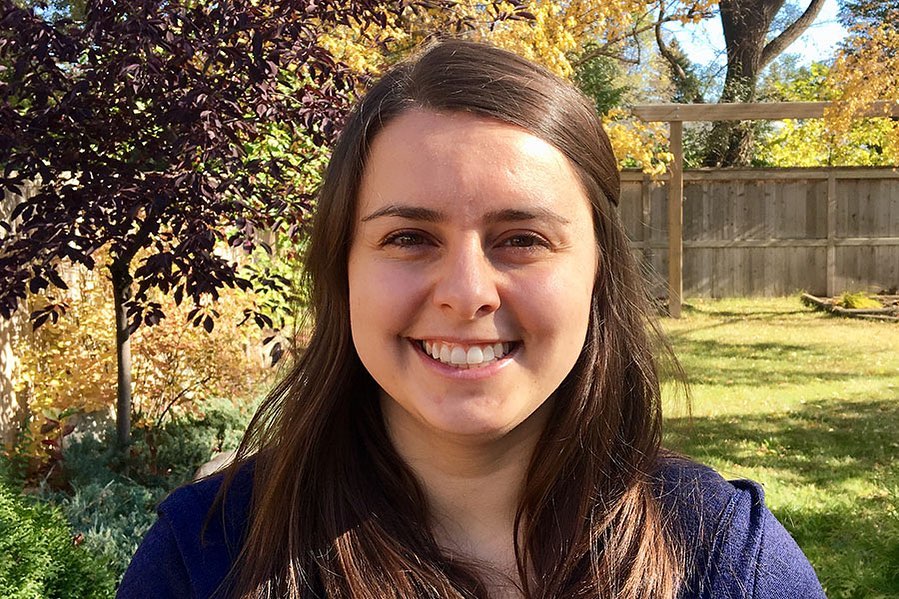 Community: what RJC & pharmacy have in common

From the outside, there isn’t much in common between being a hospital pharmacist and being a student at RJC. But for Aleta (Martens ’09) Schellenberg, there’s at least one similarity: community.

The work she does as a hospital pharmacist is different than the pharmacists in drug stores or a doctor’s office. In her role in the intensive care unit she is part of a team of caregivers. She does rounds on patients together with doctors, nurses, respiratory therapists, physiotherapists, social workers and dieticians. It’s faster-paced, working on more acute conditions, but everyone trusts each other’s expertise and works together for the good of the patient.

“I do like that the hospital is kind of like a big community and we’re a big team,” she says, “and I kind of see this tying in a bit with RJC.”

After graduating from RJC, Aleta went to the University of Saskatchewan and started in the toxicology department. But after two years she realized that many of the jobs in the field are in labs and she was more interested in working with people. So she switched into the pharmacy program and graduated with her Bachelors of Science in Pharmacy in 2015. She did a further year of hospital pharmacy residency and has been working in hospital settings ever since.

She is now a clinical support pharmacist which involves mentoring new hospital pharmacists and supervising students.

In the last year Aleta has been recognized twice for her outstanding work in practice as a pharmacist as well as in mentoring students.

She received the preceptor of the year award from the University of Saskatchewan College of Pharmacy and Nutrition. The award is given to working pharmacists who are preceptors for students during practical placements. After their terms are over students nominate preceptors who did an outstanding job.

“It’s pretty amazing to even just be nominated,” Aleta says. “But to then be chosen was really cool and a huge honour to be recognized by the college at the university in that way,” she says.

In the fall she was also nominated by her colleagues and received the new hospital practitioner award from the Saskatchewan branch of the Canadian Society of Hospital Pharmacists. This award is given to a hospital pharmacist who has been practicing for less than five years.

“It was really a huge honour and pretty humbling to see that your peers are recognizing the work you’re doing and the care you’re giving when mostly I just kind of feel like I’m doing my job,” she says.

While Aleta only attended RJC for her grade 12 year she felt her time there was good preparation for her time at university.

Growing up in Glenbush, Saskatchewan and attending school in Medstead, she was looking for a school with more peers who could push and motivate her.

At RJC, “I definitely found some peers who were really motivated to do well in school and we had great teachers that were able to teach the content well and in interesting ways that kind of resonated,” she says.

She also really enjoyed the opportunity to participate more in the arts than at her smaller school, and her experience with ALSO in Mississippi was a highlight. She spent the week helping to rebuild a house after hurricane Katrina. They had a chance to meet the family who would be living there and see how meaningful the work was.

“It was a really amazing and rewarding trip for me to see just the impact, how we were such a small group of students and the impact we were having on this family’s life.”

Her time at RJC also inspired a lifelong love of learning that serves her well. Having study time built in was helpful in setting up good school habits for university.

“That really began as I was living independently at RJC and then translated into some of those good habits later,” she says.

And the passion teachers had also emphasized that learning doesn’t end after school. “You could really see that the staff were excited to be teaching you, they were recognizing that learning continues life long,” she says, and that’s an attitude that serves her well in her work today.

“Any medical profession is always changing all the time, so we’re always doing continuing education and learning new things.”