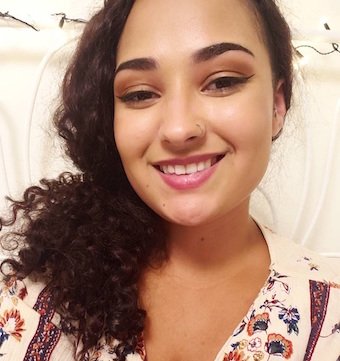 No single stories: An RJC graduate’s work to create a more welcoming church

In her popular TED talk, The danger of a single story the Nigerian writer Chimamanda Ngozi Adichie says that when you talk about a group of people as only one thing, over and over, that is what they become to you. When we have only one narrative we create stereotypes, which are not necessarily untrue but they are incomplete.

That was RJC graduate Gabby Martin’s (2015) experience as a Mennonite.

Growing up in a Mennonite family in Langham, Saskatchewan, she knew the stereotypes: blond hair, blue eyes, speaks Plautdietsch, eats Schmaundt Fat, with names like Corny and Klassen. But for Gabby, someone who is Mennonite but also Black and Syrian, that story wasn’t complete.

When churches and communities are used to that single story of what Mennonites are, they can be unwelcoming for anyone who doesn’t fit the stereotype. “It’s important to have the traditions that came before us,” Gabby says, “But it’s also important to acknowledge there are other people who are part of this religion and this culture and they also deserve to be heard and celebrated.” That vision of a more inclusive church and community is what Gabby is working towards. She is giving her time, energy and knowledge to work for change.

This summer, in the wake of the death of George Floyd and other people of colour in the U.S. and Canada, the pastoral team at Sargent Avenue Mennonite Church in Winnipeg, where Gabby attends, wanted to do something to help the congregation learn and engage in the conversation. So together with one of the pastors, Andrea De Avila, Gabby helped coordinate and lead a series of ve workshops on anti- racism and the church.

They covered key terms, ideas and movements connected with white supremacy and anti-racism, and they brought in speakers who shared their own experiences and taught the group how to listen to stories from people of colour.

While talking about race can be awkward, Gabby found the experience to be meaningful. People came with open minds and asked good questions and she built relationships with others in her church that she wouldn’t have otherwise.

Before the sessions Gabby says others would often avoid talking about her race or how she might be different. They wanted to be welcoming, so people would just say that she was Mennonite like everyone else. While Gabby knows they meant well, she said that didn’t make her feel heard. “By doing that you don’t acknowledge that I’m different and my struggles are different and they need to be heard,” she says. Now she’s found more people willing to ask questions and acknowledge her different but valued perspective.

While the series at Sargent Avenue Mennonite is over, Gabby and Andrea, who is Mexican, are also working to create a group for Mennonites of colour to share about their experiences and support each other. And they are also open to doing similar education for other congregations that are interested.

This work can be hard and time consuming, and Gabby is also in school studying nursing, but she believes it’s important.

“Not me specifically, but it needs people. So I was trying to figure out the best ways to work together and serve each other better.” And as a youth Sunday school teacher, she also feels strongly about making the church welcoming for the next generation. “I realized that this is the generation that’s coming after me and they deserve to have a better church than I did. So what can I do now to make that happen?”

Working against racism is also vital work for Mennonites, it’s included in the confession of faith. Article 22, on peace, justice and nonresistance, calls Mennonites specifically to witness against all forms of violence, including hostility among races. “It speaks about helping people who are struggling, specifically with the violence of racism,” Gabby says.

“I think that can be forgotten very quickly, or overshadowed by other articles in our confession of faith. But specifically we are called to do that, and I think there is no time like the present.”